A windy night in a beautiful coastal city and a railway station less busy than usual. A man was standing alone with large luggage and two backpacks right in the middle of the underground hallway. The multiple exit doors of the station platforms on both sides were dwarfed by the length of the hallway. He was standing firm. His eyes were peering through the abrupt emptiness, waiting eagerly for someone to pop out of the platform exit on the other end of the hallway. A woman approached him; then a little later, a security guard approached him, asking politely if he was lost. He told them something and they left assuredly. The sound of a new train just arrived and suddenly a swarm of people changed the atmosphere. Everyone was walking in groups of chaotic formations. He spotted a beautiful woman in a purple dress who was walking past everyone from left and right. His nonchalant face suddenly came to life with an ever-expanding smile. She paced towards him, opened her arms wide, and then let herself free running into his arms with a big warm hug from a distance. Strangers, while passing, were amused and stared at them with curiosity, and perhaps with joy! The two kissed each other, again, again, and again. That moment, the beautiful Tsingtao just became a reality for them adorned in kisses of love.

It was years before he saw the beer bottle in Toronto’s China Town. A colourful label with the word ‘Tsingtao’ written on it. It was just a year ago that he heard from strangers who just became his classmates that Tsingtao is a perfect Chinese coastal city for a short journey. And it was before a little over a month when the two of them sketched out a plan for a trip to Tsingtao.

The man: “I have made a list of places we can visit and make good use of a day efficiently.”
The woman: “But we never planned anything before when travelling with my family!”
The man: “I agree that I too like some spontaneity, some impromptu plans when travelling. But it’s better that we have a rough idea of how we can make the most out of a day’s outing and yet not rushing and feeling lost!”
It was a tricky trip as both for the first time we’re travelling to a city they neither visited before nor had any local friends. For the man, it had to be perfect to impress the woman. For the woman, it was about testing the man, perhaps unconsciously, on how well he could make it a cherished experience for both.
So the man-made a meticulously detailed itinerary with screenshots of the map directly to the places to visit in a given region of the city while he maintained, “Look, sweetheart! It’s JUST a rough sketch for us.” The woman, on the other hand, did her homework. She came up with a list of restaurants they could check out for Tsingtao’s famous fresh seafood.

And guess what! The first day started with a fabulous refreshing breakfast when they went out for a walk in the morning on 闽江二路 (2nd Minjiang road).

They walked hand in hand to the Olympic Sailing Centre and the harbour area. They took the winding road along the coast all the way to Haiyun garden (海韵园). It was a day on foot but so blissful for them to be able to breathe fresh coastal wind, sometimes a rarity in China. And what else could be better than ending the day with seafood dinner?

A seafood place by the Zhongshan road

The man: “I am not afraid of height. Otherwise why I would be taking the cable car and hiking up 1000+ meter 崂山 (Laoshan)? I mean it doesn’t make any sense!” He kept on repeating that while holding tight and sitting so close to the woman.
The woman: “It’s okay my love! I’m here! You don’t have acrophobia at all. I can see that! And even if you do and try to hide it, I won’t tell anyone!” She smiles.
The man: “I love hiking!” Actually, he does. 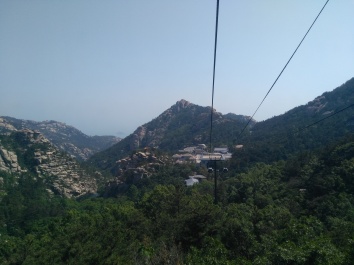 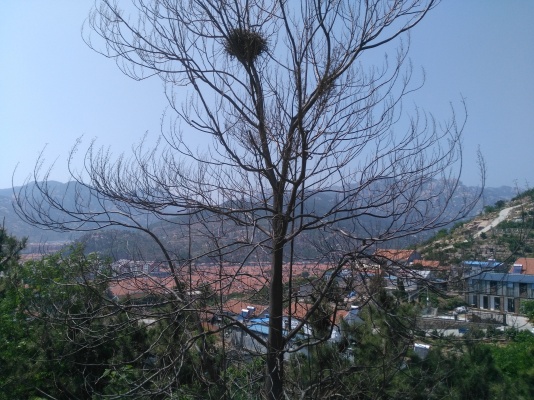 On the way up to the mountain 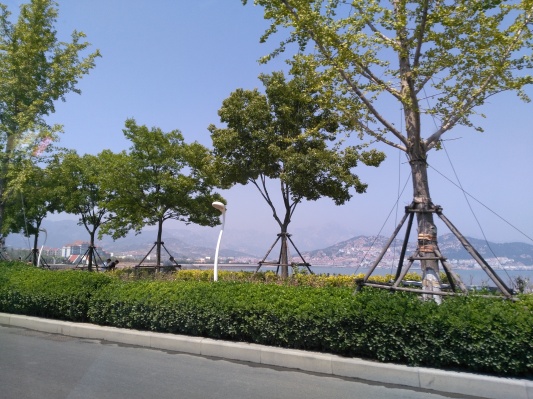 Tsingtao would be incomplete for anyone without taking a tour of its famous brewery and tasting the three main flavours! It’s a pleasant experience if the long walk inside the brewery is accompanied by a curiosity for the history of beer both in China and in the world.

Looking back, they think Tsingtao would always remain an unforgettable memory for them. If there is any regret then it is that they couldn’t visit the Tsingtao Art Gallery.